In the beginning of time there was 0…

And Then There was 1…

And then 0 and 1 started linking organizing 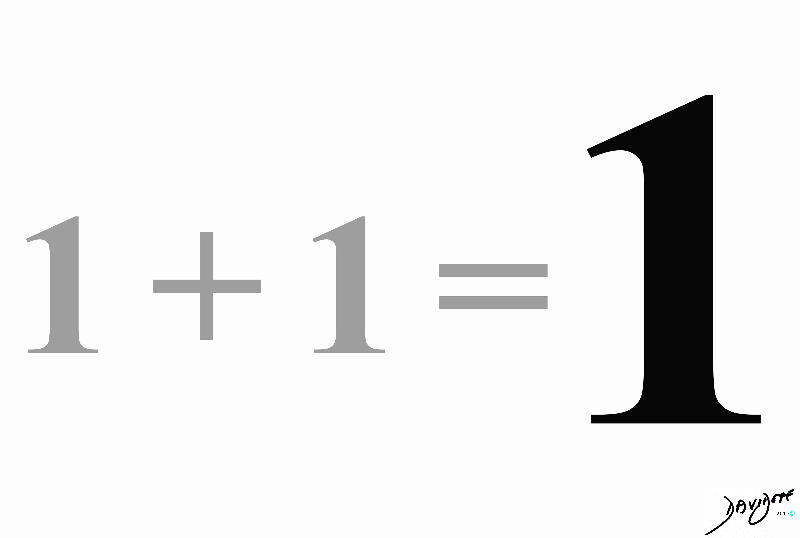 The poem was written following a discussion between 3 school friends Ashley Davidoff , Nadine Abelson and Lindsay Leveen inspired by the concept of the whole being greater than the sum of its parts.

Though 0 to the power 0 is indeterminate

In the beginning – about 13.7 billion years ago after a big bang, the universe was so hot and then as it began to cool protons neutrons and electrons were born and then the simplest atom – the hydrogen atom was born first, and remains the most abundant atom in the universe contributing to 90% of the atoms in the universe. After about 300 million years the hydrogen atoms started to clump together under the force of gravity generating pressure as they clumped and then heat resulting in nuclear fusion. As a result of nuclear fusion of two hydrogen atoms helium , then lithium was formed and then the rest of the elements up to iron (26 hydrogen atoms) were formed (http://www.physicscentral.com/explore/poster-stardust.cfm) Therefore matter formed creating the stars and then galaxies in the heavens and the table of elements on the earth up to iron. After iron nuclear fusion requires more energy than it produces. The inner core of the earth has a large amount of iron.

There were two basic forces in nature … positive and negative, and a neutral force, called the neutron.

In the atomic world .the positive is encapsulated in the proton and the negative in the electron while the neutron resides with the proton in the nucleus.

When  positive and negative interact – it is not a simple interaction.  It is not a 1+1 =2 , and is closer to 1+1=1.   It is like marriage.  Firstly by their union they still retain their individuality, go their separate ways with the electron in orbit and the nucleus staying central, but remain bonded and together they form a new unit.

At the time of big bang the electron, proton, and neutron were formed.

The hydrogen atom is the building block of all else to come.

The marriage between the electron and the proton is not a simple one.  It is not as black and white as it seems since as a result of the marriage the electron is bound to the nucleus and the proton is bound to the electron.  The motion of the electron in an orbit allows it to keep its distance from the proton and prevents the two from crashing and falling head over heels into each other, or nulling each other.   The hydrogen atom is set in motion and as a result of the electrical force in motion an electromagnetic field is set up.  The spinning of the hydrogen atom forces the atom to be in a certain position in space at a given time as it moves – Voila – the elements of space, time and motion, are manifest in the units.  The units have mass and elements of electromagnetic and mechanical forces.  The  interactions, allow bonding, and new units are established.  Uniqueness, dependence and independence of each of the units follows.  These are elemental and foundational principles common to all matter- organic and inorganic, biological or otherwise and will be repeated ad nauseum in the following texts.

With the birth of the universe, an infinitesimal number of hydrogen atoms were born and let loose to build bigger and better units with their new found expression through mass, time, space, electromagnetic force, and motion.

The electromagnetic forces and the fact that the hydrogen atoms are moving, forced the atoms to come into contact with other hydrogen atoms and random reactions took place in the presence of the given environment in which temperature, mass, motion, space, time, electromagnetic forces, and facilitators were relevant to the reaction and the result was the creation of other atoms and elements. (Bader)

The Building of New atoms and Elements

The remarkable similarity between the structure of the atom, and the structure of the solar system, leads one to ponder the recurring organizational pattern of things in between. If one considers the atom as a unit and the solar system as a unit then the technique of combining units to build bigger units more powerful than the individual parts allows us to understand in some measure the unifying units to units concept or 1+1= 1

If for example split a piece of charcoal, which consists of pure carbon, and break it up into its component parts, it will end up as an atom of carbon that will have the same chemical characteristics as the original charcoal If you were to do the same thing of chopping up an iron molecule till it ends up with characteristic component parts, you would end up with iron atoms that behave in similar fashion as the original iron bar If the chopping continues then the iron particles will be broken up into protons, neutrons and electrons.

If on the other hand we took water and started breaking it up into its component parts then we would arrive at the molecules of water wth 2 hydrogen atoms and one oxygen atom. Individually these would not behave like the water molecule but rather like hydrogen and oxygen individually. Then as they get broken up further into electrons protons and neutrons, they will not behave like oxygen or hydrogen but like protons electrons and neutrons.

When a substance consists of a single type of atom it is called an element. There are 92 different elements found naturally on the earth .

A substance that is made up of more than one atom is called a compound. 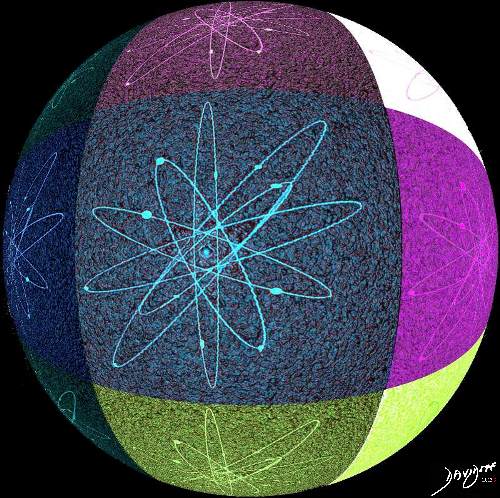 The elements are categorized into the groups of alkali, metals, alkali earths, halogens, noble gases.

The atoms also link to different atoms to form molecules

So What About Biology?

The Units of Biology and
Fundamentals of life:

Carbohydrates (hydrates of carbon) are organic compounds that usually contain carbon hydrogen and oxygen in the ratios: 1 Carbon: 2 Hydrogens: 1 Oxygen.

Monosaccharides and disacharrides are two types of carbohydrates

Molecules molecules and then macromolecules

Three fatty acids and a glycerol

All fats are derivatives of fatty acids and glycerol. They, like the carbohydrates are created from a combination of carbon hydrogen and oxygen which link and organize to form a fat soluble compound. The triglycerides consist of one unit of glycerol and three units of fatty acids

Proteins are polymers constructed from a series of 20 different amino acids. This is the linking part.

The organizing part is the a specific sequence specified by the gene resulting in the primary structure.

When other proteins join a quartenary structure results 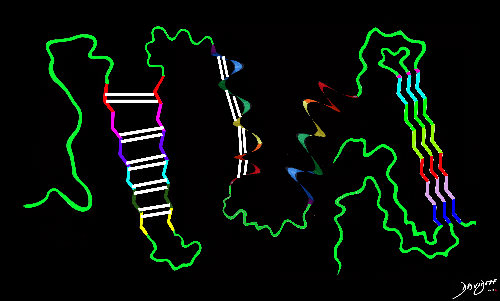 Nucleic acids are  small biomolecules, essential to all forms of life. They consist of  nucleotides.  A nucleotide is a monomer composed of:  5-carbon sugar, a phosphate group and a nitrogenous base.

The sugar may be a ribose or a deoxyribose

A base is a a substance that can accept hydrogen ions (protons) or more generally, donate electron pairs.

sugar phosphate = hand rails together thy form a nucleotide

Infrastructure of the Double Spiral

Ribose as a pentose sugar

Uses Uracil and not Thymine

Davidoff A Birth of the Nucleus Blog 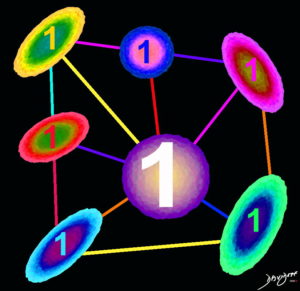